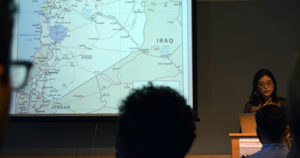 Northwestern University’s Shanya Silverstein came to campus on February 19 to present a specific component of her current research: the traditional dance of dabke and its relationship to the contemporary political turmoil surrounding the Syrian civil war. This form of performance, which is deeply tied to individual localities within and across Syria, has in recent years emerged more and more frequently through video footage posted to social media sites such as Facebook. Silverstein began her talk noting that such videos quickly attain popularity not due to any dancer’s individual virtuosity, but rather, because of the turbulent memories they conjure. These videos call such emotions as nostalgia and loss to their Syrian viewer, no matter how close to home they are.
In fact, later on in her talk, Silverstein notes that though Syrian refugees come to the forefront of the mind in imagining this scenario, those who still reside in Syria have similar reactions. Many Syrian residents are, according to Silverstein, nostalgic for a Syria that once was, prior to the Arab Spring. She proceeded to provide the major framework for her talk: that, though the performance of dabke dance contains within it elements of utopic collectivity, it also perpetuates dangerous components of Syrian hegemony which fragment and polarize those who practice it.

For the sake of visualization, a quick description of dabke: the key heuristic of the dance is called harakāt, or the negotiation of social spaces between individuals. As a line of connected people dance, each does so by physically anticipating the move of the individual on either side of themselves. Silverstein stated that this relationship, of balanced interdependence, “make[s] legible the affective, embodied, spatial and temporal processes through which persons negotiate the webs of sociality and balance of power in which they are situated.” For example, some of the thrill of dancing dabke, she said, is the simultaneous experience of being immersed in the flow of the dance while constantly edging on the brink of collapsing it.
This realization led to Silverstein’s discussion of dabke as a seemingly central part of military cultural practices, where it oftentimes “preludes impending violence.” She presented multiple different readings as to why this is true, citing, for example, a video wherein a group of police are dancing, substituting a rosary for a beating rod and a gun. She claimed that, due to the affective power which travels between men as they dance in preparation for incurring violence, it is placed in close proximity to pleasure and thus justified. The performance, in this case, serves to represent not the utopian or collective, but instead perpetuates hegemonic and militarized notions of masculinity.

Silverstein concluded her talk by discussing a stage production from 2017 called “Displacement,” which she said explored the dialectical relationship between the hegemonic and anti-hegemonic. The work was born of the author’s experiences and difficulties traveling in both Syria and Europe, as well as his inability to connect to natives of either place. In the conversation with Deena Chalabi following Silverstein’s talk, they discussed the tenuous position of such a production, calling into question for whom one dances, and the ways in which it contributes to the “othering” of Syrians across Europe. They also went on to discuss the restricted Internet access in Syria up until 2011, as well as Silverstein’s own dance practice, and works of audiography.