Poetry and the Senses has launched! 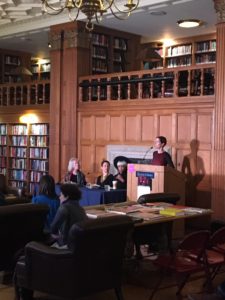 Our celebration of the launch of Poetry & the Senses was a joyous combination of indulgence in the arts and critical concern for this year’s theme. Participating readers—Indira Allegra, Chiyuma Elliot, and Lyn Hejinian—were introduced by our director Julia Bryan-Wilson, and further lauded by the director of the Arts + Design department on campus, Anthony Cascardi, Dean of Arts & Humanities. His remarks included reflection upon the Arts Research Center’s collaboration with the Engaging the Senses Foundation, which provided the room with a useful contextualization of and reflection upon the creation of the program. He recalled how our work concentrates on the arts as a way of interacting with the world, exploring its further discovery: and thus, the creation of Poetry & the Senses. Additionally, everyone extended their great thanks to Mona Abadir, the CEO of Engaging the Senses, for her vision in bringing Poetry & the Senses to life.

Though the evening’s speakers are not a part of this year’s cohort, our theme of emergency serves as a useful organizing principle for the work that they shared. Each poet’s collection of readings, in their own distinct fashions, worked not only with confronting, but also with coping, understanding, and analyzing emergent affects associated with the traumas inherent in emergency and crisis.

Indira Allegra was the first poet to read, prefacing her time with an acknowledgment of those indiginous peoples on whose land the reading took place. She began with a short reflection upon the etymology of “disaster,” noting that the the suffix of the term, “aster,” refers to both to starstuff as well as a purple daisy used to treat ill lungs. The prefix affixed to this root, “dis,” implies, per Allegra, that “we are the flood / and the flooded both.” This comparison linked beautifully her interest water as something one can write “in and through;” titles of her poems included “Waterborn,” “Drown,” “Mother’s Blues,” and “Landfall” in six parts. Phrases such as “freshwater mothers” and “floodwater dreams” emerged in “Landfall,” allowing for the connection of her separate concerns. Interestingly, she explicitly introduced her exploration of flood, fresh, salt, and still as different forms of water which, in her writing, reference different forms of language.

The following reader, Chiyuma Elliot, called more upon the affective experiences associated with tragedy, as opposed to Allegra’s more epistemological approach. She pointed to texts such as Tommy Orange’s There, There and various postmodern photography in her introduction of her work, establishing the idea that these sort of representational pieces can (and do) enact important political work. Her own poetry continued to reinforce this profession. Titles such as “Tomorrow I Will Look at Paintings” and her “Family Portrait” series featured reflection on larger themes via small, everyday ephemeral moments. The verse actively worked upon the listener, causing them to perform similar comparisons through sharply alternating line structures and enrapturing details. These merged the representational mentioned at the start and the reflections that they incur, making them into one single experience. These came to a head in Elliot’s final reading, “Still Life with Game, Champagne, and Vegetables” by way of the line “there are so many ways to arrange the dead.” 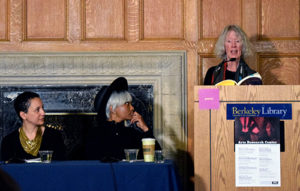 Lyn Hejinian read last, and wrapped the event with readings from her 2001 collection A Border Comedy. The sentiments of this work, in a way, synthesized the cores of the prior readings in its focus on the evolution of the term “border” as well as its inquiry as to the multiple meanings of the word. As language poetry oftentimes deems itself, there was a difficulty in gleaning a cohesive concept from a first reading, though Hejinian entertained multiple asides which guided her thinking. These asides were further taken up at the start of the readers’ conversation. The evolving notion of “border” over the last twenty years was taken up by Hejinian as she noted that “in the 90s, the border was a realm of possibility.” It was a “utopian” term, then, which implicated the changes that inevitably occur in the border zone. It, in one sense, encompasses the ideal space for the poet, “where all things can arrive.” Of course the acknowledgment was made that now, the concept brings to mind the turmoil and tragedy taking place at the U.S.-Mexico border. The conversation maintained, though, that there is merit to be found in the term’s embrace.

The conversation concluded with discussions of composition, this being a perfect return to the idea of sustained writing practice. Poetry & the Senses is working to facilitate this sort of ritual, and hopefully, to inspire future conversations like these.

To learn more this year’s events, you can visit our Poetry and the Senses page.