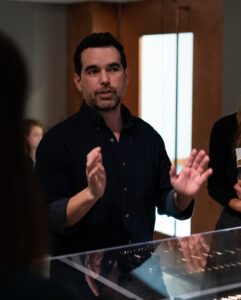 Dario Robleto is an artist, researcher, writer, and teacher based in Houston, Texas. Throughout his twenty-five career, Robleto has sought to cultivate rigorous, mutually transformative interactions between the arts, humanities, and sciences. Tapping into multiple creative traditions ranging from astrophysics to cardiology to poetry to DJ culture, his work has focused with particular intensity on theories and practices of recording and on the material and emotional structures of intergenerational relay and memory. Robleto has exhibited his work extensively since 1997 at museums such as the Menil Collection, Houston, TX, and the Whitney Museum of American Art. His work has been profiled in numerous publications and media including Radiolab, Krista Tippet’s On Being, and the New York Times. He has been a visiting scholar and artist-in-residence at institutions such as the Smithsonian Museum of American History; the SETI Institute; the Robert Rauschenberg Residency; and the Radcliffe Institute for Advanced Study at Harvard University. In 2015 he joined a distinguished team of scientists as the artistic consultant to “Breakthrough Message”—a multi-national effort that aims to encourage intellectual and technical debate about how and what to communicate if the current search for intelligent life beyond Earth is successful. In 2016 he was appointed as the Texas State Artist Laureate. In 2020, he was a research consultant to the popular science television series, Cosmos: Possible Worlds, which aired on National Geographic and Fox. He is currently serving as Artist-at-Large at Northwestern University’s McCormick School of Engineering and the Block Museum of Art and is working on his first book, Life Signs: The Tender Science of the Pulsewave, published through the University of Chicago Press and co-authored with art historian Jennifer Roberts, the Elizabeth Cary Agassiz Professor of the Humanities at Harvard.

During his stay, Dario Robleto will give an artist’s talk in conversation with ARC Director Julia Bryan-Wilson, meet with students in the seminar, Feminist and Queer Theory in Art, as well as conduct studio visits with MFA students in the Department of Art Practice. 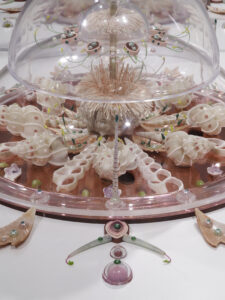 Artist Talk with Dario Robleto
in conversation with Julia Bryan-Wilson

Presented by the Arts Research Center with co-sponsorship from the Departments of Art Practice and Ethnic Studies, the Berkeley Center for New Media, the Latinx Research Center, and the Program in Critical Theory

Each year ARC affiliated faculty are joined by prominent or emerging artists who are invited to campus for extended visits to pursue their own creative work (original research), collaborate with students and faculty, and participate in the ARC faculty seminar. In cooperation with other units on campus, these visitors also teach on campus and present their work to the general public in various forums.

Residencies of one to three months give visiting artists space and time to pursue their work; allow students to work with leading practitioners in their fields; stimulate and challenge faculty artists and scholars; and give local community members the opportunity to engage with important artists (and vice versa). Artists visiting Berkeley find particularly valuable the opportunity to interact not only with other artists, but with the University’s critics and curators, and with scholars from the humanities and sciences. Over the past 20 years, ARC has been honored to welcome the following 25 practitioners: Susannah Sayler and Edward Morris (Sayler / Morris) work with photography, video, writing, installation and open source projects. A primary concern of their work is to engage both contemporary efforts to develop ecological consciousness and the opportunities that art offers for social movements. In 2006 they co-founded The Canary Project – a studio that produces visual media and artwork that deepen public understanding of climate change and other ecological issues. Sayler/Morris have exhibited internationally at many venues, including both science and art museums. Some past exhibitions have featured at the Massachusetts Museum of Contemporary Art, the Harvard Museum of Natural History, the Nevada Museum of Art, the Cooper Hewitt National Design Museum, the North Carolina Museum of Art, the Kunsthal in Rotterdam, the Museum of Science and Industry in Chicago. They have been awarded the David Brower Center’s Art / Act Award (2016), the Robert Rauschenberg Foundation Residency (2015), the Smithsonian Artist Research Fellowship (2014) the Loeb Fellowship at Harvard University’s Graduate School of Design (2009). They are currently teaching in the Transmedia Department at Syracuse University, where they co-founded The Canary Lab. Their archives are collected by the Nevada Museum of Art / Reno, Center for Art and Environment.

Water Gold Soil: The American River tells the story of a single flow of water in present-day California, from origin point to end-use. The project is both a form of historiography and a form of allegory – using this swath of geography to investigate our present Age of Extraction. With Water Gold Soil, the artists examine this less visible, technological reality of California rivers by following a single flow of water – the South Fork of the American River – from its origin near Echo Summit in the Sierra Nevada mountains to its end use in the agricultural economy in California’s Central Valley. This is the flow of water where gold was first discovered in California, and the project explores how the state of California remains haunted by its violent and colonial beginnings of the state of California.

The project consists of an ongoing assembly of original photographic and video works, archival images, writing, maps and other media. All of the elements are combined to produce installations that take the viewer through a series of conceptual frameworks. The diversity of form and materials in the project stems from an appreciation for the challenges of representing the nexus of relationships–ecological, political, and historical–that make up a river. A book of the project will be published in spring 2019.

While at Berkeley, the artists will continue to investigate the way ideology informs the use of technology in water management and allocation.  They will research current technological innovations that help prepare California for future water shortages, particularly in light of climate change and increased demand. They will also research what ways of seeing the world might lead to a more equitable and sustainable use of existing and emerging water technologies (e.g. the commons, indigenous philosophies, critiques of neo-liberalism, history of water law). They are preparing additional exhibitions of the work to follow the book, as well as a related made-for-TV documentary series that they are producing along with Paul D. Miller (aka DJ Spooky) and director Stefan Schaefer.

About the Art + Science Program:

The Center for Science, Technology, Medicine & Society (CSTMS), in partnership with the Arts Research Center (ARC), hosts an artist-in-residence program that will focus on nurturing exchanges between art, design, technology, science, and engineering at UC Berkeley, in the Bay Area, and across the region. More information can be found here.

Bull.Miletic were the inaugural Art + Science Artists-in-Residence at University of California, Berkeley, co-sponsored by Arts Research Center and Center for Science, Technology, Medicine & Society. While on campus, they worked on a joint artistic research project on the aerial view in motion at the Department for Media and Communication, University of Oslo and Norwegian University of Science and Technology. Learn about their project here.

For the last two years, Bull.Miletic has been engaged in The Aerial View in Motion, an artistic research project facilitated by Norwegian Artistic Research Programme. The project focuses on the emergence of a new visual paradigm caused by the recent surge of aerial imaging technologies such as satellites and drones. At UC Berkeley, Bull.Miletic will be working on the concluding segment of this project, which will focus on exploring a variety of scientific, cultural, and historic visualizations of earth in a new media installation. Taking the Pale Blue Dot and Buckminster Fuller’s notion of Spaceship Earth as a starting point, their intention during their residency is to explore the relationships between the “objective” ortophotomapped representation of the earth through visualized data sets and the affective volume-image of our planet as a vibrant ecosystem that “spins in space traveling 60,000 miles an hour, in the midst of rich non-human life as well as the intensive relations to other planets and the Sun”. The resulting artwork is scheduled to premiere at the 2018 Meta.Morf Biennial for Art & Technology.

About the Art + Science Residency Program: The Center for Science, Technology, Medicine & Society (CSTMS), in partnership with the Arts Research Center (ARC), is initiating an artist-in-residence program that will focus on nurturing art/technology/science/engineering exchanges at UC Berkeley, in the Bay Area, and across the region. The program opened with a pilot residency in Fall 2017, featuring the artist duo Bull.Miletic: Synne T. Bull (University of Oslo, Norway) and Dragan Miletic (Norwegian University of Science and Technology). The Arts Research Center was delighted to host a 10-day residency with acclaimed artist and community organizer Rick Lowe. Lowe’s Project Row Houses, founded two decades ago, has created a blueprint for using urban renewal practices within an artistic context to enrich lives. Located in Houston’s Northern Third Ward, one of the city’s oldest African-American neighborhoods, Lowe’s Project Row Houses was founded with 22 houses on a block-and-a-half and today occupies six blocks that are home to 40 properties, including exhibition and residency spaces for artists, office spaces, a community gallery, a park, low-income residential and commercial spaces, and houses in which young mothers can live for a year and receive support as they work to finish school and get their bearings.

By committing to what has been called a “politics of staying,” Lowe has been able to develop Project Row Houses into a wide ranging social service center, a center for ideas, and an influential artist residency program. The organization has developed over the past twenty years to become a site of experimentation for new economic models in sustaining social and artistic communities, particularly within the community of socially-engaged art.  Lowe has been honored with the Rudy Bruner Award in Urban Excellence; the AIA Keystone Award; the Heinz Award in the arts and humanities; Skowhegan School of Painting and Sculpture Governors Award; Loeb Fellow at Harvard University; Skandalaris Award for Excellence in Art Architecture; USA Booth Fellowship; and the Creative Time Annenberg Prize for Art and Social Change.

During his time on campus, Lowe presented the 2014 Regents Lecture “Social and Community Engaged Work: The Genuine and the Artificial” on Monday, November 17 (as part of the Art, Technology, and Culture Colloquium) and participated in “Public Art/Housing Publics: Conversations on Art and Social Justice” on Friday, November 21, in addition to meeting with students, faculty and community organizers throughout the Bay Area involved in socially-engaged art practices.