This semester, our director Julia Bryan-Wilson is teaching a class intertwined with our Visual Activism series, also called “Visual Activism.” Instead of generating our own account of Alfredo Jaar’s recent ARC talk “When the Music Stops,” we’ve decided to feature four unique responses from the students in the course.

As a student who has never taken art history before, I found the event with Alfredo Jaar  today was incredibly interesting to me because it shed light on what it is like to be the artist. In  the beginning I found it fascinating how he continuously said that he did not create the art  intentionally. He painted the picture vividly — a young man in despair expressing himself  through art. This really stood out to me because I felt like I related to this in many ways. I am not  personally creating art, but I feel like around me I have many peers who are constantly  expressing their despair with our political, 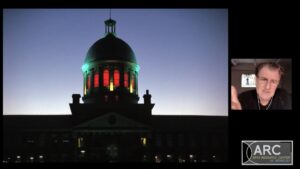 economic, and social situation in various forms. They  may look back and think “oh this was actually art” and realize it in the same way that Mr. Jaar  did. Furthermore, it enhanced my understanding of art as a natural expression of your  environment. The second aspect of the presentation that stood out to me was Mr. Jaars art in  Canada with the homeless shelters. I found his expression and version of representation and art  to be absolutely inspiring. I am studying the disproportionate impacts of governmental public  policy on minority communities and a constant question that is asked is “ how to help people  without imposing ourselves on their lives and disrupting their environments”. There are so many  times when people come in and try to raise awareness, but end up just creating more damage and  creating a “white savior complex”. For example see this with community service projects in  other countries that end up just exploiting the native communities. However, in this case Mr. Jaar  took into consideration how the homeless population would feel and whether or not they would  not want their identity shared. Using this information he constructed art that managed to bring  them attention while respecting their space. He also did this in Chile during the military rule. His  methods of raising awareness, giving dignity to the group he is representing, and simultaneously  respecting them to teach me not only about art, but also proper ways to go about my future  endeavors.

The conversation with Alfredo Jaar made me think about the alternative forms of visual representation that the artist offers to discuss sensitive topics. In many of his works, there is a strong accent on ephemerality and invisibility. However, the consistency and the repetition of this pattern break the temporality and bring visibility to the unheard voices and unseen issues worldwide. I believe his early art practice in Chili under Pinochet’s dictatorship is rooted in this allegoric and poetic style that the artist implements. In many of his examples of public interventions, Jaar plays with public behavior or directs this behavior in a certain way. For instance, in the Montreal installation of “Lights in the City” inside the  Cupola Jaar brings visibility to the 15,000 homeless population, otherwise unseen and unrecognized by Montreal’s citizens. The question of visibility is present in the early works such as the project of disappeared by marking their 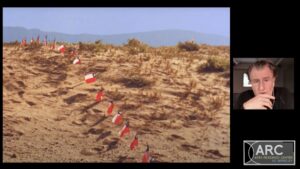 presence with Chilean flags, which divide the deserted land and the water of Chili, the 11 project, video works, etc. These series of passive actions, fragmented traces, and residues create larger and stronger reactions on the beholder. As Jaar mentions, his manifesto is “I will not act in the world, before acting in the world,” yet his actions are not explicit and full of ambiguity.

Many of the interventions also have a strong educational emphasis trying to get out of the elitist institutional setting and have a conversation with a broader public, such as with the projects of  Scougal paper mill kunstale project and Dallas museum installation.  Many of these public interventions oppose the binaries of visibility and invisibleness. In his works, Jaar juxtaposes the marginalized entities to different power structures,  often putting them into an uncomfortable situation.

By far my favorite part of Contemporary Art in the Americas, the class that first introduced me to Alfredo Jaar’s work, was learning about coded and covert political art during Latin American dictatorships. I was incredibly moved by Before Leaving Chile, how it perfectly encapsulated the pain of leaving your beautiful home, one that is no longer inhabitable. The series of works that Jaar created as a young adult after the coup d’etat that ousted Salvador Allende, where he changed the date of calendar days after 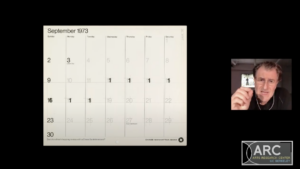 September 11th, 1973 to all be the 11th, was really interesting to learn about, especially in context with his later works where he continues to explore the pain of living in a dictatorship. I like that he spoke of his work at such a young age as an immediate reaction to the trauma he was experiencing and think it is amazing that Jaar was making such impactful, moving, conceptual work before he even thought of himself as an artist. During his talk, Jaar stated that through making art during the dictatorship in Chile, he was creating spaces of freedom in a place where there was none. He ended his presentation by saying that art and culture are the last remaining spaces of freedom, which is such a powerful and true statement. The Black Lives Matter protests this summer made me reexamine the violence of institutions, especially institutions that have been around for a long time. Jaar’s statement that the individual, or a collective of individuals, creating culture and art to describe their experiences are some of the only things untouched by the violence of institutions, held true during the military dictatorship in Chile and still holds true today.

My favorite part of the presentation was hearing about Alfredo Jaar’s interventions and how clever they are. I appreciate how even in his later art, he carried with him the idea of more covert messaging in art. His pieces are never obvious, but instead have layers of meaning that you need to sit with to peel back and understand. For example, his piece with the Nasher Sculpture Center in Dallas, where you hear the cries of newborn babies from hospitals in predominantly POC communities was really poignant and moving to me. It was really great to have Jaar himself explain the meaning of the piece because if I had experienced the work myself, I am sure that I would not have discovered all the layers of meaning. Similarly, if I was simply a tourist walking past the Copula in Montreal after the installation of Jaar’s intervention, I would not have understood what the red lights meant. But the houseless people in the Montreal shelters who pressed the button that made the Copula light up would know exactly what the red light stood for, and maybe that is the point. A really cool aspect of Jaar’s art is that it takes on such different meanings for the different people who experience it. This is also the case with his intervention in Sweden, where after people experience the art museum set up in Skoghall, it is set on fire. This piece takes on such a different meaning for the community who lives in Skoghall versus outsiders who might view the piece. The Skoghall community, who at once are given this temporary gift of art and then have it literally disappear before their eyes are forced to reckon with what to do in the aftermath of the loss of this incredible gift.

Jarr began his speech with a quote by Salvador Allende that said “to be young and not be a revolutionary is a contradiction that is almost biological” which is very fitting for the function of his artworks.

I found it very interesting that Jaar said that he was not “aware” that he was becoming an artist and producing artwork, he just felt that he was expressing what he was feeling in response to the 1973 coup in Chile. I also appreciate his emphasis on self expression and opinions, as well as laughter as a way of coping with the censorship and absence of democracy. I also thought that it was really interesting that his performance art was interactive, and would spark conversation between people during a time of massive oppression- as to satisfy this need for interaction when asking provocative questions would have been highly penalized. He wanted to create “spaces of freedom” when he “didn’t have any” and I really like how he sees that art is one of the last spaces of freedom and I really agree with that. Art is limitless, a way to achieve the impossible, express what you are feeling, and convey concepts that may be otherwise invisible. I feel like because he used art as a form of expression, it explains his fascination with emotion and translating emotion through video and photography like his project “Faces”. I also appreciated his sentiments about providing visibility to the homeless in Montreal, and the use of the red light was very distressing, and an important reflection of the urgency of the epidemic of homelessness. I like that he also wanted to preserve the privacy and dignity of these homeless people. So much of Jaar’s work deals with social justice and giving representation to marginalized groups like the homeless, 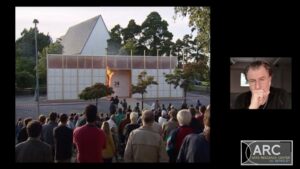 immigration and artists. I think that the burning of the art museum in Sweden was to not impose something onto a community, but the motivation for the project was achieved.  I like how aware he is of the function that his art serves for people, and it feels like democratization is a central theme of his work, and I wonder if that comes from being deprived of it for so long at the beginning of his career in Chile.

This lecture was live streamed and recorded, and is available for viewing anytime here.