All of us at the Arts Research Center were fortunate enough to kick off our Fall 2020 programming with a virtual visit from Favianna Rodriguez, a local Bay area visual artist whose work is inextricable from her aims as an activist. Her talk was the first in a series called Visual Activism, which was programmed in conjunction with our director Julia Bryan-Wilson’s art history course by the same name. 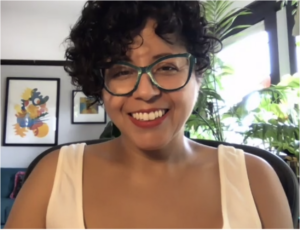 Favianna began her talk by laying a foundation for her work, consisting of her identity and background—of being Afro-Peruvian, of being from a family of immigrants, and of being raised in Fruitvale, Oakland, where she was subject to systemic inequities as a result of being situated in a food desert and in between two major highways. She started the conversation this way in order to build towards what felt like her strongest belief expressed during her talk: that visual art (and thus, culture) has much more power than one might initially think in its ability to effect social change.

In order to illustrate this change concretely, Favinna displayed the first photograph of Earth, taken from space in 1969, via her shared screen. She noted how this single photograph was able to so massively alter humanity’s relation with the planet upon which we live. From this shift, she noted, came the creation of the Environmental Protection Agency, as well as Earth Day as a national holiday. “This is one of the driving concepts of my artistic practice,” she said, “to show a different kind of perspective that has been obscured by design.”

As another facet of her core design concepts, Favianna expounded upon the idea that social change occurs within three realms: the cultural, the political, and the economic. She went on to explain that, essentially, she chooses to effect political power in an artistic way because that is what goes on to alter the culture. And, of the three aforementioned realms, the realm of culture by far moves the fastest, thus influencing the rest. “A law is the final manifestation of an idea whose time has come,” she stated. “But in the realm of culture, we create that idea.”

One of her own works which is in the process of exemplifying this idea is an image of a butterfly, captioned “migration is beautiful.” Favianna discussed two sources of inspiration behind this piece—the phrases “black is beautiful” and “gay is good” of the ‘60s and ‘70s—just before unveiling that her piece is presently being hung in Kamala Harris’ office. She explained also that the symbolism of the piece and its inspirations represent an exemplification of beauty in her political stances, as opposed to the alternative of focusing upon just her struggles. To focus on the very natural process of immigration as something beautiful instead of something criminal is what she said that she aims to inspire in all of its viewers. 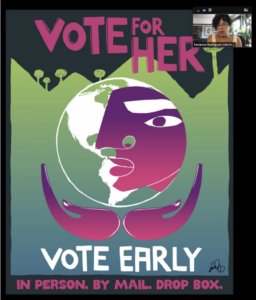 Focusing on the beauty is where Favianna left us—instructing us to imagine what our “yes” looks like. She mused about the duality of both actionably opposing those things in our world which we do not want to be occurring, while simultaneously creating tangible artistic visions of what it is that we do want our ideal world to look and feel like. In the face of such difficulty that comes with the combination of the emergencies of COVID-19, climate change, systemic racism and an economic crisis, she made a point of noting that there is also an incredible amount of space opening up for stories to be told.

Favianna Rodriguez helped to found the Center for Cultural Power, whose resources she shared at the end of her talk. You can find some of those here.

This lecture was live streamed and recorded, and is available for viewing anytime here.