March 31st marked the eleventh annual Trans Day of Visibility, perfectly cuing this reflection on our most recent event held on campus. Trans artists and activists Tourmaline and Chris Vargas came together to present their film work, followed by 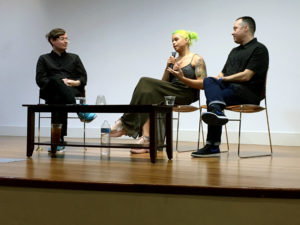 a conversation with Eric Stanley of the Gender and Women’s Studies department, on the fifth of March. Vargas, once an ARC fellow and MFA student here at Berkeley, began by presenting two of his pieces, “Have You Ever Seen a Transsexual Before?” and “Work of Art: The Next Great Artist.” Tourmaline, a director based in New York City, then presented two of her films, titled “Atlantic is a Sea of Bones” and “Salacia.”

Vargas’ screening quickly relayed major themes that his work commonly takes on, which he fleshed out later in the discussion portion of the talk. “Have You Ever Seen a Transsexual Before?” featured his empty cries towards various landscapes, performing what he called a “futile project of visibility.” He shouted, again and again, “Hello vast salt land… Hello Death Valley… Hello Americana… Hello Mormon headquarters…” only to then quickly flash his chest to the adresse and exclaim “Have you ever seen a transsexual before?” The intense camp elicited by this endless call and low-production green-screen landscapes spoke to what Vargas later described as a disarmament via humor.

Vargas’ other film, “Work of Art: The Next Great Artist,” was a spoof on a Bravo reality show which Vargas said highlights some of the intracommunity tensions between LGBTQ members. The contestants in the film are given tasks such as “creat[ing] a successful piece of queer art about failure,” in order to win a two-page spread in a “gay publication.” Rife with laugh tracks and painfully direct puns, the film scrutinized the societal trend of accepting only the most marketable queer self-expressions. For instance, a large pop-art piece concerning Prop 8 won the contest, despite its having been obviously disingenuous as compared to Vargas’ character’s piece on a trans man’s routine on Dancing with the Stars put in slow motion.

Tourmaline’s work, though geared in a similar direction as Vargas’ politically speaking, was attuned specifically towards aesthetic’s activist capabilities. She prefaced “Atlantic is a Sea of Bones” as a piece designed to explore the potential in listening to “the haunting,” of ancestors, of memories, or of physical places. She also designated the film as being in part about the true capacity of people who have been pushed down to come into their own. It features shimmering purple, green, and blue hues throughout, and centers a gender-ambiguous person in a claw-footed tub full of milk. The liquid contrasts brightly against their dark skin.

Her second film, “Salacia,” more directly depicted the retelling of a history, as it appeared most broadly as a period piece that would classically feature a solely white cast. Instead, Tourmaline’s film is concerned with an all-Black community, and the predation upon one of its members. This member of said community is suddenly seen on a sign reading “WANTED: THE MAN-MONSTER,” and is thus captured by a white man and jailed. The main actress who has been captured monologues about “the River Jordan” in direct comparison to the Hudson, and is featured in the final scene repeating the phrase, over and over, “We can be anything we want to be.” She begins doing so in a fearful tone, and finishes in a fierce one.

During their conversation with Eric Stanley, the two artists mainly reflected upon their respective works’ strategies concerning activism, specifically around visibility for the trangender community. Stanley prompted Vargas about his approach by way of humor, citing the pressure for hyper serious work that is often imposed around the topic. Vargas responded by discussing his love of pleasure, and how that sensation can be a strong driver for creativity and clarity when placed inside a bind, or a limit, such as his holding a minority position in the hegemony. With Tourmaline, Stanley asked her primarily about her focus on the aesthetic and the inbuilt difficulties with such, as they have a very definite limit. She briefly discussed how influential looks have been in her own life and throughout history, such as how Stonewall began by one person’s having violated the number of oppositely gendered pieces of clothing they were allowed to wear. “When I first started,” she said, “it was about making for an audience that was not considered worthy of being made for. It’s about the beauty of the nobodies.”