At the end of February, curator Horace Ballad, Ph.D. visited us from WIlliams College to speak on his recent exhibit “possible selves: queer foto vernaculars.” Ballard is the Lead Curator of American Art at the Williams College Museum of Art (WCMA), and thus began his talk with a brief description of his perspective concerning art history and the canon. He admitted that though he does not believe that the discipline will open itself up to change at any point in his lifetime, “we don’t need Americanness anymore, just great humanness.” 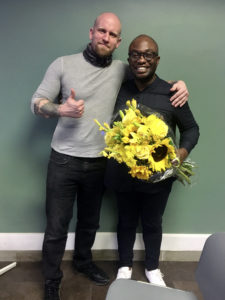 Stemming from his idea of the essence of “humanness,” Ballard went on to explain the attraction of portraiture for him. He presented it as a genre, one which almost universally represents an entity at a particular moment in time—in fact, it often stands in for the presence of that entity. It was lines of thinking like these that led Ballard to consider mining Instagram, approaching it as a space for contemporary portraiture. In conjunction with this inspiration was a drive to represent the collective body of queerness today, as inspired by theorists such as Sara Ahmed and José Esteban Muñoz.

Ballard then had to set upon the project of “sourcing queerness,” which, though it felt strange, felt to him like an “obvious next step” in his career as a curator and as a queer man. He explained his process, phrasing much of it as one would a set of data. Over the summer of 2018, Ballard and two interns set out to service a list of over 100 different Instagram hashtags, focusing on “a future imaginary” implied by gender affirmations. They also focused upon terms such as “radically inclusive” and “quuer” in their broadest senses. After four months of culling their thousands selections, the team settled on a mere 300. These were organized in various categories and displayed completely anonymously.

Taking advantage of what Ballard called a rare opportunity for curators to reflect, he then spoke on what he might have done differently in retrospect. One of the most concrete and striking concerns he brought up was a dissection of his use of the term “vernaculars” in the title of the show. Ballard taught the room that the words, when read as the sum of its roots, is meant to mean “native, domesticated,” and thus inherently in support of the hegemonic. He said that his main takeaway from reflecting on his execution of the exhibit was thinking deeply about the way that we use words, and the limitations of a photograph on a wall in representing a whole person. “We, as humans,” he concluded, “are contingent and extremely fraught.”

After his lecture, Ballard had a brief conversation with Mellon Postdoctoral Fellow in the Digital Humanities, Justin Underhill. They ended the event on a more humorous note, about a piece of art which was in the show alongside the Instagram images. This piece was “Rainbow Bread” by Tim Davis, and Underhill inquired to Ballard as to why it was in the show; why it might have been perceived as somehow similar to the collections of portraiture. Both speakers laughed at the image, and then acknowledged the more difficult realities of commercialized queerness, and the sister effect of what Ballard called a “racialized menagerie of meaning.”