In spite of the many moments lost to the global upheaval this year, the Arts Research Center made an attempt to virtually celebrate an exhibit that has yet to make its date. On November 12, our director Julia Bryan-Wilson was joined by her co-curator Olivia Ardui to present the exhibition catalog for their show “Histories of Dance,” which was scheduled to take place in 2020 at the Museu de Arte de São Paulo but was drastically reduced due to the pandemic. Also a significant force in the curation of the show was Adriano Pedrosa, the Art Director at the Museu, who was unable to join in the talk that evening. The two were joined, though, by Thomax Lax, Curator of Media and Performance at the Museum of Modern Art. Lax queried Bryan-Wilson and Ardui about multiple aspects of their experience creating the show, expanded upon here later. 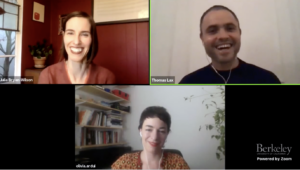 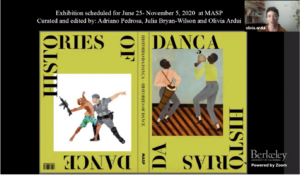 The two curators began with a presentation of the physical exhibition catalogue, which is now available for purchase here. Ardui began with a background of exhibitions that have taken place at MASP umbrellaed by the concept of histories, a term which she explained has an extra bit of nuance in Portuguese. Not only does it contain the meaning of a past, but also implicit is that past’s stories. Thus, “Histories of Dance” came about in part as a result of these structurally partial, fragmented, non-exhaustive, non-chronological, nonlinear exhibits before. Stemming from this concept and integral to the show was the choice made, which is especially vivid in the catalogue, to begin their research from terminologies of dance, as opposed to typologies of dance. “We decided to take, as one of our starting points, some of the key terms that you can find in a lot of different dances across time and space,” Bryan-Wilson said.

These various organizing principles—which head each chapter of the catalogue—are improvisation, duets, gravity, tension and resistance, training and composition, and lastly, rhythms and synchronicities. Bryan-Wilson gave brief explanations for the thinking behind each term, such as, for example, improvisation as having been defined by thinkers such as George Lewis and Fred Moten as a kind of strategy for minoritarian subject to “wiggle outside the frame.” Other standout explanations included that of tensions and resistance, as well as gravity. Gravity, as it was explained, gestures in the project towards a preeminent force with which all dance reckons with. Tension and resistance had a similar valence about it, signaling a dual meaning of the muscular phenomena which occurs when dancing as well as dance’s unique impact during tense times, or when performing certain political resistances.

The catalogue’s concluding chapter is named not by a specific dance term, but rather, a phrase: against the wall. Contained within this section is a general reflection upon dance as an art form present within the space of the museum, and the recent interest—which, according to Ardui, borders on “obsession”—of the visual art world in dance as a medium. These curators took this context into much consideration, structuring the exhibition in the way that they did, in part, to make extremely transparent their own curatorial process. Thomas Lax described their project as “something incredibly difficult; nearly impossible,” referencing what they call “this conceptualization of what it is to think of dance in the most material and embodied of terms.” Their approach to the exhibition was influenced largely by their recognition of this fact, and the wealth of possibility available to them in such an expansive international show. In speaking with Lax, they touched on the politics of loan agreements and other museum-specific culture which inevitably helped shape the contents of the show.

The spirit of both mourning and celebration which the event brought to the space was incredibly inspiring; to sense possibility in the face of such difficulty. Lax went on to ask the two a wealth of questions which further developed our ability to conceive of the exhibition. You can watch the event, available in full on our YouTube channel, here.