Ajuan Mance, a local artist and professor at Mills College, graced ARC with her virtual presence near the end of this past November. Her talk was focused on a project that she completed over the course of six years, from 2010 to 2016, called 1001 Black Men. Just as is implied in its title, the project is made up of 1001 portraits drawn of Black men whom Mance encountered personally, mostly in the Bay Area, but throughout the United States as well. “This project,” Mance explained, “gives special attention to those identities within Blackness—elders, geeks and nerds, and others—on whose silence and invisibility oppression depends.” Portrayed in a pared-down pop art sort of style, these portraits truly distill a distinctive essence of each subject they portray. 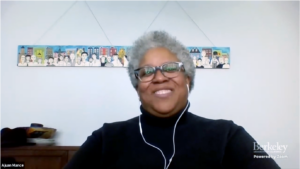 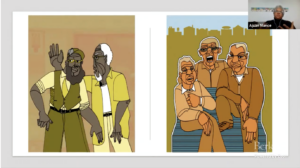 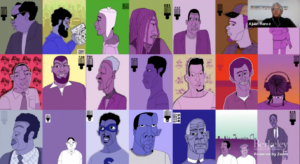 Mance spent the majority of her talk touring through a select few of these portraits, pointing to various ideological inquiries they spurred from. Guiding all of them, Mance said, was her attempt to see Blackness where others don’t. She told a short story of meditating on the sorts of Black representation across Essence magazine covers, and how she came to realize that there were, in reality, a scant few kinds of the many Black men living in the 21st century. She challenged herself, then, to attempt to depict most every kind of Black man she encountered in her daily life.

A few of these kinds of men Mance specifically set out to represent more fully include geeks, nerds, and elders, among others. She gave explanations behind her wishes to represent these folks most heavily. She mentioned the classical American beauty standard of toned musculature and symmetry most often found in the looks of young Black athletes or models. The men that she most wished to represent had different traits which made them equally as admirable, according to Mance. For example, in regard to nerds and geeks, Mance said that “[she thinks] there’s something transgressive about African American people of all genders taking the space to play.” Thus, her focus upon Black cosplayers and comic enthusiasts she encountered at ComicCon San Diego.

Another demographic that Mance wished to focus on in order to counterbalance hegemonic representations is Black elders. Mance cited “the idea of having survived white supremacy for an entire lifetime” as an unbelievable trait of Black elder men which she found deeply worthy of admiration. She listed multiple local haunts where she encountered many of her subjects, and noted that not a single person said no to having their photograph taken. Such haunts include her local grocery store, a local diner, and others. She cited hypervisibility for Black elders, as well as the portrayal of these Black elders together as important components of her project.

She also modeled her pseudonym for the project, as well as her logo, around its central ethos. She signs each work by the name “8rock,” which she explained as being Zora Neal Hurston’s term for “a very Black person.” This name is generally featured with the logo of a barcode pick, holding the number of the portrait of the series within it. Mance concluded her talk with an explanation of where this project is headed. In part, this meant announcing the imminent arrival of a 1001 Black Men book to be released in 2021. Despite this specific project having reached its conclusion, she expressed her explicit interest in continuing to chronicle African American lives in their many intricacies.

Ajuan Mance continues to work on a similar project, titled Bay Area Heart and Soul, of which she shared a few featured images. You can find the 1001 Black Men online sketchbook here. This talk is available online, where you can also hear Mance’s extended question and answer segment with our director, Julia Bryan-Wilson, and the director of the Center for the Study of Sexual Cultures, Mel Y. Chen. The video can be found here.