On this last and very tense election day, the Arts Research Center had the pleasure of virtually hosting Erin McElory of the Anti-Eviction Mapping Project, whose talk was a welcome distraction to us all. Topically, they began their talk by recounting the current president’s roots in the realm of private property and capital accumulation, noting that his father Fred Trump accrued his wealth in his role as a New York City landlord. McElroy used this as a jumping-off point to move towards the core of their talk, explaining the roots and multiple evolutions of the Anti-Eviction Mapping Project.

Some of the greatest importance behind their project lies in the fact that it is oddly difficult to ascertain exactly who is evicting tenants. Finding this information comprises a large portion of their research. The ownership of an extraordinary number of buildings, most significantly after the 2008 financial crisis, is listed under vague and untelling LLC or LP business titles, such as the name of the street that the building is on. McElroy brought to light the fact that a great many of these are owned by the same people looking to evict lower income tenants, and rebrand to those with more income. This, they explained, is the process behind mass eviction movements throughout the Bay Area, as well as the rest of the country. 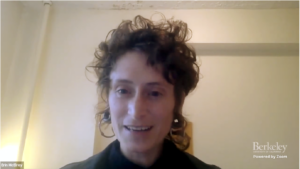 In the face of such an abstract and invisible chain of events, McElroy’s project aimed to make these mass evictions as visual and seeable as possible. “It’s quite complex to do, though,” they explained, “because you often have to merge together eviction data, with parcel ownership data, with corporate entity data.” As time passed in their creation of the project, McElroy said that they came to realize, despite the utility of the work that they were doing, they were also reducing stories of displacement to mere numbers. Thus, the project moved into what McElroy calls “narrative mapping,” displayed by the Narratives of Displacement, Oral History Project of the Anti-Eviction Mapping Project. Featuring oral histories of those who have been evicted or effectively fought off eviction, the map is rich with first hand accounts of many who McElroy knows personally. This map is continually being added to to date.

In addition to their data mapping projects, McElroy and their team have also worked to create murals and tagging stencils throughout the city, as well as a physical issue of a zine. Their largest mural had a “call-the-wall” feature, where passersby could call a number and hear clips of the same oral histories featured in the Narratives of Displacement map. “We wanted to make sure that the work we were producing would live in analog spaces [as well as online],” McElroy said. 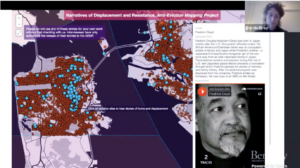 McElroy was also sure to cover the ways in which their project explores inverse and opposite forms of mapping, such as tracing where it is that the displaced population has ended up going. Much of this data led them to houselessness and death: “Evictions can be, and often are, deadly.” Another form of mapping which they have explored, and is perhaps more geared towards a brighter future, is encompassed in their Oakland Community Power Map. Instead of documenting what has been lost, this map aims to make visual and concise what is still left in gentrified neighborhoods, and what people are still fighting for.

McElroy and the Anti-Eviction Mapping Project’s efforts have grown in their reach, now spanning from Los Angeles to the Bay to New York City. Their newest project, Counterpoints: A San Francisco Bay Area Atlas of Displacement and Resistance, can be found here for pre-order.

Erin McElroy’s talk is available online, where you can also hear their extended question and answer segment with our director, Julia Bryan-Wilson. The video can be found here.