Soul of a Nation: Art in the Age of Black Power 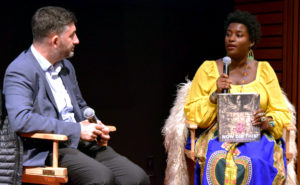 Thursday, November 7th of 2019 was marked by a conversation between Mark Godfrey and Kenyatta Hinkle, hosted by ARC at the David Brower Center. The two—Godfrey of the Tate Modern and Hinkle of UC Berkeley’s Art Practice Department—came together to discuss the opening of Soul of a Nation: Art in the Age of Black Power at the de Young Museum the night prior. By the time the collection reached the de Young it had travelled to five different locations throughout the United States. Godfrey, who is the senior curator of international art at the Tate Modern, co-curated the show alongside Zoe Whitley, also a curator of international art at the same museum. Whitley was unable to attend our event that evening, and so it was left to Godfrey to present their curatorial methodology and research efforts employed throughout the project.

For the first portion of the talk, Godfrey introduced the audience to the exhibition in order to lay the groundwork for the following conversation. Some of the most integral descriptions he provided to understanding the work were architectural—he explained that the collection was laid out in seven distinct rooms organized in terms of communities of Black artists and the problems that they were encountering in the twenty years bounding the project. He contextualized the prioritization of aesthetics over politics as having been pursued in order to augment historical gaps in the Tate’s collection. He made it apparent that, in regards to this curatorial project, his philosophy was that there is no single Black aesthetic. Rather, it was the artists’ concerns and individual championships which influenced his choices most heavily.

The most generative portion of the evening was by far the conversation between Godfrey and Hinkle. As a part of the Art Practice Department here on campus, Hinkle teaches painting and drawing at the undergraduate and graduate levels while simultaneously working on her own art practice. She brought all of this experience to their discussion, interrogating Godfrey’s specific research tactics and commending the way in which he introduced artists into the space. 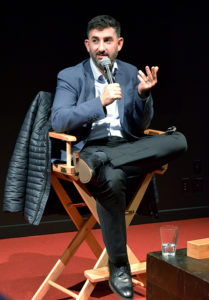 She began her commentary by noting some exhibitions to which Soul of a Nation owes great homage, such as Now Dig This! which was shown at the Hammer Museum beginning in 2011. Notable for also documenting Black art from around the 1960s to the 1980s, Hinkle recalled having gone to see the collection at least three times as a graduate student. She compared this and others greatly with Godfrey’s project, presenting his as an extension and expansion of those similarly preceding it. She spoke to the necessity of “having them enter into the white cube,” and in this way receive institutional validation. They wondered together not entirely about the politics of Black art, but about its aesthetic stake, and about what it means to be represented in the canon in one’s entirety when they may not have been before.

The talk concluded on a more speculative note concerning Hinkle’s favorite of the seven rooms, which showed objects emanating themes of mysticism, religion, and spirits—each of which has “such resonances” as according to Hinkle. The two concurred that the presence of these fetish objects in a space like the de Young or the Tate effectively disrupts assumptions associated with them, and is in itself a revolutionary act.

Soul of a Nation: Art in the Age of Black Power is on view at the de Young in San Francisco through March 15, 2020.