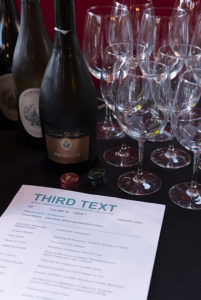 On November 12 of this past year, ARC celebrated the completion of the upcoming issue of Third Text, a journal of critical perspectives on contemporary art and culture, guest edited in part by our director Julia Bryan-Wilson. We hosted a small get-together at the Beta Lounge in Berkeley to collect our community around the concept of amateurism, and its many intrigues and merits.

Three of the contributing authors to issue joined us during the evening: Lorraine Affourtit, Abigail de Kosnik, and Anneka Lenssen. In the midst of the party, attendees formed a small circle and each author said a word concerning their contributions, and the importance of amateurism to their practice.

Affourtit, a Ph.D. candidate at UC Santa Cruz, gave a short review of her article, titled Televising the Revolution: Oaxacan Women on CORTV. She explained its relevance to amateurism in that, as the title reveals, these women who overtook the CORTV for many days at once had never broadcast in their lives, and yet their doing so was wildly effective and revolutionary. Her upcoming article will chronicle her research whilst putting pressure on the effect of subjects’ amateurism on their work.

De Kosnik’s piece, Piracy Is the Future of Culture: Speculating about Media Preservation after Collapse, concerns exactly that. Specifically geared towards uplifting the practice of piracy in light of possible dystopian futures, her article is composed of the conception that current day pirates of media are soon to be considered amateur archivists, as it is their media that is most likely to survive said collapse. De Kosnik is an Associate Professor for both the Berkeley Center for New Media as well as the Theatre, Dance, and Performance Studies department on campus.

Lenssen is also associated with Berkeley, as she teaches in the Art History Department and advises for the Center for Middle Eastern Studies. Her contribution to the Amateurism issue is titled The Filmmaker as Artisan: An Interview with the Members of Abounaddara. Abounaddara, an anonymous film collective which played a key role in documenting the Arab Spring in Syria, is composed of self-taught filmmakers. Lensssen explores, among other things, the vitality that their amatuer perspective brings into their work.

This special issue of Third Text will be the first issue in its 34th volume—it will be released in 2020.