Danez Smith and Patricia Smith, who were meant to read together on campus this past March, graciously joined us online instead. This past December, they spent nearly a half an hour each reading their poetry for our virtual audience, and afterwards, spoke with one another as well as some folks from ARC. Our Program Director, Laurie Macfee, as well as one of our 2020 Poetry & the Senses Fellows, Menat El Attamah, engaged them in a range of topics from the pandemic to the poetic imagination. As many of us are rather familiar with nowadays, there has to be a very special valence to an event for it to shimmer even on a screen, and this was one of them, without a doubt. 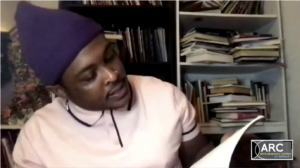 Danez read titles from a few different collections of theirs, including “summer, somewhere” from Don’t Call Us Dead, “Dinosaurs in the Hood” from Homie, and a new poem titled “1955,” among others. They seemed to focus, in a way, on balancing their reading with works which at once pertained to an important happening, as well as brought levity and conjecture to the moment by means of future dreaming. Patricia’s poems were fewer, though comparable in their rich capability to enrapture. The first piece she did not mention the name of, though it featured refrains concerning Black hair and its majesty. Those in attendance were particularly touched by this piece, as the YouTube chat was flooded with praise. Patricia read two other works which were complements of one another, titled “1. The Angels,” and “2. The Madonna.” Based upon a painting she once encountered titled Madonna del Parto, by Piero della Francesca—which features the Madonna and what Patricia called a “come hither glare”—which she said inspired the poem(s). Both poets’ readings were, through and through, incredible performances. 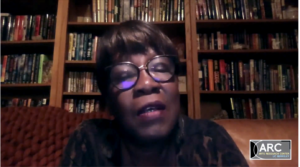 Perhaps the most exciting portion of the event, though, was the end, composed of the various conversations that occurred in the wake of the readings. Danez and Patricia, who mentioned the existence of their very close friendship outside of the event, seemed to be made comfortable by one another’s presence and were thus incredibly vulnerable in their responses to the questions asked to them.

Most topically, our director began this section with a sort of a check-in concerning the global pandemic and current state of the world. Patricia responded first with a rich chronological journey through the ways in which she has been learning to adjust to current circumstances. “Things were cluttered, at first,” she explained of her life attempting to teach and support her students and write, all from home. She guided us through the ways in which she processed grief, and eventually managed to turn back to writing as a guiding force in her life. “It’s vital,” she said, “to remember the importance of not handing our own life stories over to anybody else.” This importance organically led her to keep on writing, of which she said, “by writing, we’re sending light out to as many corners as we can.” This light, she explained, contains within it that reminder to remain the main character in the tales of our own lives. Danez mused in a similar way, noting more about their physical experience in these past months as it pertains to their writing. The reflected upon how “very, very” local they were to  Minneapolis, MN this year, where typically they are “bopping around” from place to place. This sort of more thorough knowing of a place also seemed to lead them to reflect on the people within that place. “I really miss—my poetry really misses—strangers,” they said, noting how small newnesses that strangers tend to embody would often spark their writing a poem.

The conversation moved, as sparked by a question from Menat El Attamah, to the poets’ thoughts on imagination’s role in their works. This topic seemed imbued with their thinking about the last question, as both authors told of imagination as a strategy for imaging what “could be or what we missed” in our collective realities.  “You had to imagine yourself [in the reality you needed],” Patricia added, in reference to her childhood, “there was no other way there.” This messaging felt inspiring in the wake of the emergencies all around us today, as though poetry can function as a survival tool for working concretely towards better realities for us all. Patricia also noted that the way in which our imaginations approach imaging, according to her, often reads like a sort of poetic signature in any work of verse by a specific author.

The conversation went on to cover a great many wonderful topics; the full recording of the event is available for viewing on our YouTube channel, here.