An Evening of Healing, Remembering, and Song with U.S. Poet Laureate Joy Harjo

In celebration of Earth Day’s 50th anniversary, U.S. Poet Laureate Joy Harjo joined Beth Piatote and the Arts Research Center on April 22nd for a virtual poetry reading and conversation. Born in Tusla, Oklahoma and of the Muscogee (Creek) Nation, Harjo is the first Native American to serve as the U.S. Poet Laureate. She was reappointed to a second term shortly after her ARC reading. Harjo shared her work that Wednesday evening with over 1200 attendees on YouTube Live; she read from collections old and new, even singing from what she said is an upcoming album. 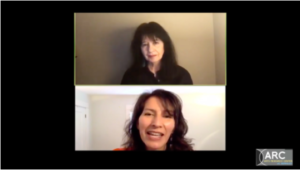 These works that she shared were cultivated in response to our unfortunately relevant theme of “emergency” previously established for this year’s Poetry & the Senses program, and Harjo’s words could not have rung through more clearly. She began the talk laughing and musing about being glad to be “here,” and yet wondering where “here” is, as everyone was present via an internet connection. She continued this theme of wondering about location and technology by “opening the door” with her recent poem “For Calling the Spirit Back From Wandering the Earth in Its Human Feet,” from her 2015 book Conflict Resolution for Holy Beings. The poem reminded all who were listening to be aware of their consumption of processed goods and to continue to turn to nature in difficult times such as these. It begins:

Put down that bag of potato chips, that white bread, that bottle of pop.

Turn off that cellphone, computer, and remote control.

Open the door, then close it behind you.

Take a breath offered by friendly winds. They travel the earth gathering essences of plants to clean.

Give back with gratitude.

Continuing to uplift the idea of returning to the earth in times of crisis, Harjo read an older piece which she said “came out of a need to praise beautiful land,” the experience of which gave her “the energy to begin.” It is from Secrets of the Center of the Earth, published in 1989, titled “My House is the Red Earth.” Musing upon the ways and places from which we all center ourselves, this poem, as well as many of the others read, offered a way to take a step back and recall that there are still some aspects of place which “words cannot construct … for there are some sounds left to sacred wordless form.” Perhaps there are still some things which have been left to sacred virtualless form, too.

After her reading, Harjo engaged in a discussion with the Associate Professor of Native American Studies at UC Berkeley and ARC Poetry & the Senses Fellow Beth Piatote. They discussed many facets of Harjo’s art practice, including singing and music as integral to Native poetry, and its ability to “move energy, or bring medecine,” as was said by Piatote. Other topics included the ancestral roots of Harjo’s poetry, mapping as a practice done alongside poetic composition, and the difficulty of knowing when a piece is done. Attendees from the YouTube Live Stream were also able to interact with and ask Harjo questions, many of which had to do with the communal chaos (or, as one attendee put it, “Coyote Time where tricksters abound”) of the current pandemic, and ways to fill our medicine bag even in the face of such. Harjo concluded the talk with a new poem called “The Life of Beauty,” which she said was about “the empowerment of women,” and the healing of humans alongside the healing of the Earth— where “the sun blessing of creation led her into the human story. That was the first beauty.”

Joy Harjo has generously allowed us to share the full recording of this event on our YouTube page until Thursday, May 7th. You can watch it here.