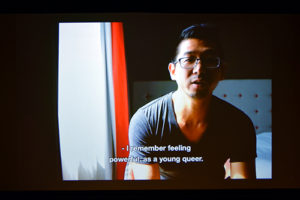 December 1st is World AIDS Day, dedicated to a crisis which is still in its deepest throes. ARC co-sponsored a special film screening to commemorate the day with the California College of the Arts—this being the 30th Annual Day With(out) Arts film “Still Beginning.” Composed of seven contemporary short films solicited by the film’s producer, Visual AIDS, “Still Beginning” screened in over 115 venues on that same day all over the world.

These short films were geared especially towards avoiding a sense of “resolution or conclusion,” according to the organization’s website, in order to relay the continued currency of the crisis. The minimal attendance of the screening vaguely reflected the gradual recedation of cultural consciousness surrounding AIDS, thus rendering projects and screenings such as this all the more important. The individual from CCA who ran the talk, Anthea Black, spoke to observing this trend during her 16 years of personal activism concerning the condition, and reported just as the film does how pervasively important it is to her and others affected, even as time marches on.

The seven artists whose projects composed the larger film are Shanti Avirgan, Nguyen Tan Hoang, Carl George, Viva Ruiz, Iman Shervington, Jack Waters/Victor F.M. Torres, and Derrick Woods-Morrow. Despite the use of primarily archival footage in multiple pieces (such as those by Viva Ruiz and Shanti Avirgan), all of the projects were focused in some way on temporality, chronology, and process/progress. They all take retrospective views towards the ways that the crisis has been approached in the past—in terms of public sex, public housing, public health—and recontextualize them according to the results of the present.

For example, Woods-Morrow’s inaugural piece titled “Much Handled Things are Always Soft” interrogates the cruising culture of public parks in the Chicago of the 1970s from a current day perspective. The film, which prioritizes the presence of pleasure, makes it unclear as to what is past and what is present. It forces a contemplation of what the AIDS crisis has taken away from the community in concert with what it is that no affliction can ever take away. Its ruminations on race and resistance echoed predecessors such as Tongues Untied in its insistence that past is perhaps more poignant to the present moment than anything else.

The concluding portion of the film, “I Remember Dancing” by Nguyen Tan Hoang, placed similar significance on collapsing temporality as a collection of gay Asian American men speak into Skype-esque cameras about their memories of queer, AIDS positive lives. Responding to regret, remorse, lack of representation and more, Nguyen’s film leverages the power of memory in order to collapse the timeline.

Each individual project allowed space for its own niche within the activism surrounding the HIV/AIDS cause, and each provided such a caring treatment of its subject as to inspire the same in any viewer. The entirety of the screening is now available on the Visual AIDS website.